Experts weigh in on safety of area pipelines

While memory of 2008 explosion is fresh, officials say such incidents are rare 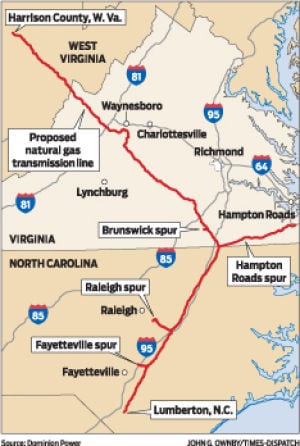 Dominion Resources Inc. is in the preliminary stages of considering building an approximately 450-mile-long natural gas transmission pipeline that would go through Nelson County on its course from West Virginia to southern North Carolina.

Calling all locals
» Are you a Nelson County resident who has professional experience working on or with natural gas pipelines? The Nelson County Times would like to interview you for a future story. Contact Rachael Smith at (434) 385-5482 or by email at .

Within the steady drumbeat of opposition to a proposed natural gas pipeline that would run through Nelson County, residents have raised many questions publicly, including issues of their safety.

According to the National Transportation Safety Board, transmission pipelines are one of the safest ways to transport energy. Within the Central Virginia region, experts could recall no regional pipeline-related incidents that resulted in any deaths.

But there has been at least one dramatic incident in recent history. The underground Transco natural gas pipeline runs nearby through Appomattox, Campbell, Pittsylvania, Buckingham and Fluvanna counties. It is operated by Williams Gas Pipeline and has been transporting gas from Southwest Texas to New York since the 1950s. The first delivery was to Danville in 1951.

Williams operates three pipelines. Transco is the largest one, delivering one-fourth of the gas used in Virginia with 900 miles of pipe.

“It’s out of sight, out of mind,” said Chris Stockton, spokesperson for Williams. “It comes on with electricity but not a lot of people put thought into the underground infrastructure.’

Stockton said the pipe’s minimum requirement is to be buried at least three feet underground. In agricultural areas, the minimum would be at least five feet.

“The only thing you notice is at fence crossings,” he said. “There are markers that cross out of the ground where it says there is a pipeline there, warning people not to dig.”

The only time Williams had a fatal accident was in Louisiana in the 1950s, when someone dug into the pipeline and was unaware of its presence, Stockton said. Now, pipelines must be marked.

However, in September 2008, the Transco pipeline in Appomattox exploded due to external corrosion. Though there were no deaths, five people were injured, two homes were completely leveled, and more than 100 homes were damaged in the blast. “[Explosions] can be very dramatic, they are very rare but when they do happen, they tend to get attention,” Stockton said. “That is what we work every day to try and avoid; it’s a once-in-a-career incident. You do everything you can to make sure your pipeline operates safely because you don’t want to see that happen.”

“It was a doozie,” said Gary Roakes, Amherst County director of public safety. “It took out a couple of houses and cars. That was a humdinger.”

“You try to learn from it and make sure it doesn’t happen again and you apply to other systems as well,” Stockton said. “It was a unique type of corrosion, but we were able to apply that learning to other parts of our systems.”

Stockton said the most common pipeline-related injuries occur when someone digs and accidentally hits the pipe, possibly thinking it is located deeper than it is. He said the other threat to pipelines is corrosion, but the company takes precautions to try and protect the pipe.

According to company records, in 2013 there were five Department of Transportation reportable Transco accidents and four from other Williams’ pipelines, Stockton said. No one was injured.

An accident is considered reportable to the Department of Transportation if it causes anyone to be hospitalized or if it results in a release of gas that costs more than $50,000 to fix, Stockton said.

Another area natural gas pipeline runs through 30 miles of Augusta County and is operated by Columbia. Columbia records have indicated no safety-related incidents have occurred on that line since it was placed in 1931, company spokesman Scott Castleman said.

“We take it very seriously when we undertake a project,” he said. “It’s important for us to make sure things are safe and reliable. When a project like this comes through a town, there’s always a lot of concern from landowners, and that’s understandable.”

Castelman said Columbia takes the safety of neighbors seriously, including aerial and walking patrols of pipeline right-of-ways; in-line inspections, which use tools that run through the pipe to detect corrosion or damages; and a gas control monitoring center, which monitors its entire pipeline system 24 hours a day, 365 days a year.

“We use those open houses as a way to have community members to meet us and learn how we do business, how important safety is to us, and hopefully they walk away understanding how many pieces go into a project when we put in a pipeline,” he said.

Another pipeline in nearby Amherst is an eight-inch liquid gas line run by Colonial Pipeline that was put underground in 1963. This pipeline transports diesel fuel, heating oil, jet fuel for airports and regular gasoline used for cars. There is no propane in the pipe.

Colonial Director of Communications Steve Baker said its records show no spills or releases from the pipe in Amherst or anywhere along the line’s length from the town of Columbia, in Fluvanna County, to Roanoke.

As for Dominion Resource’s proposed natural gas pipeline, it would enter the state in Highland County in western Virginia and run in a southeasterly direction through Nelson, Buckingham, Dinwiddie and Brunswick counties, where it would turn south toward North Carolina.

Although the company has begun survey work along the 450-mile proposed route, Dominion has agreed to postpone any local surveying work until representatives meet with the Nelson County Board of Supervisors at a meeting Aug. 12.