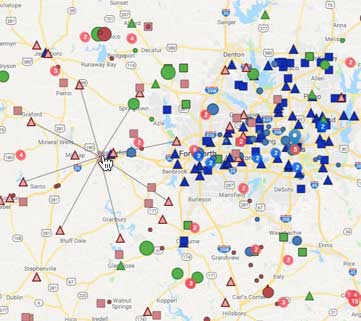 People often wonder about the failures of pipelines in their areas. To help people visualize how often pipelines fail we have created maps that allow you to examine failure information state by state, and the pop-up windows will provide reported information on each failure as you select it. We have provided some basic information about each failure such as type of pipeline, operator, cause of the failure, how much product escaped, size and pressure of pipeline, numbers of injuries or fatalities, etc. We did this work on the CARTO mapping platform with a generous grant from CARTO.

We started this project in California, where we originally included all the failures since 2002. We have since added incidents going back to 1986. All of this uses PHMSA incident data, which PHMSA updates at the end of each month. We hope to update the maps nearly as often. We have also included population density overlays in many states, but because of storage limitations you will not find that in every state. As this mapping effort evolves, we hope to include additional information.

Each month we also track the largest (by volume) unintentional release from the three major types of pipelines. We call this the monthly Perp Walk. If you would like to see who had the largest release each month starting in January of 2018 you can get The Monthly Perp Walk here.

All of these failures are based on the following definitions in PHMSA’s regulations:

“Incident” means any of the following events:

(1) An event that involves a release of gas from a pipeline, or of liquefied natural gas, liquefied petroleum gas, refrigerant gas, or gas from an LNG facility, and that results in one or more of the following consequences:

(i) A death, or personal injury necessitating in-patient hospitalization;

(ii) Estimated property damage of $50,000 or more, including loss to the operator and others, or both, but excluding cost of gas lost;

(3) An event that is significant in the judgment of the operator, even though it did not meet the criteria of paragraphs (1) or (2) of this definition.

An accident report is required for each failure in a pipeline system subject to this part in which there is a release of the hazardous liquid or carbon dioxide transported resulting in any of the following:

(a) Explosion or fire not intentionally set by the operator.

(b) Release of 5 gallons (19 liters) or more of hazardous liquid or carbon dioxide, except that no report is required for a release of less than 5 barrels (0.8 cubic meters) resulting from a pipeline maintenance activity if the release is:

(1) Not otherwise reportable under this section;

(3) Confined to company property or pipeline right-of -way; and

(c) Death of any person;

(e) Estimated property damage, including cost of clean-up and recovery, value of lost product, and damage to the property of the operator or others, or both, exceeding $50,000.

You can find a limited subset of this failure information on PHMSA’s National Pipeline Mapping System (NPMS). You can find a tutorial on how to use the NPMS here.

Please contact us if you have questions about this mapping effort, ideas for improvements, or have other comments.