A transmission pipeline owned and operated by El Paso Natural Gas ruptured and a fire killed 12 campers near Carlsbad, New Mexico, on August 19, 2000. The ensuing fireball was large enough to be seen in Carlsbad 20 miles to the north. Federal investigators determined that the cause was severe internal corrosion of transmission pipeline 1103; over 70% of the wall had been eaten away near the rupture site. The Carlsbad pipeline event was the worst US gas explosion since a leaking propane gas pipeline killed 33 people in San Juan, Puerto Rico, in 1996. 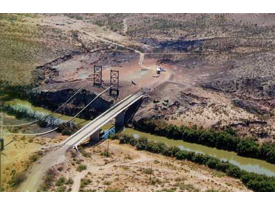 Aerial view of crossing carrying El Paso Natural Gas pipelines across the Pecos River in Eddy County, New Mexico. To the right of the bridge is the crater formed by the August 19, 2000, pipeline rupture, which was blamed on corrosion in a 50-year-old pipe. Source: New Mexico State Police. 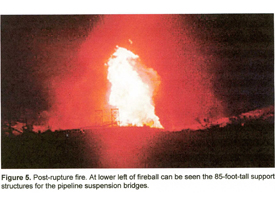 NMPIRG Education Fund Report on the Incident: Download it here