We believe...
...that communities need to understand the risks, and be empowered with information and technical expertise.

We serve...
...as an independent public interest voice when things go terribly wrong.

Both sessions of our webinar, The Enbridge Spill and Its Consequences, are now available for on-demand viewing 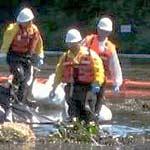 The Pipeline Safety Trust’s new publication, A Decade In Review: 2010-2019, is now available for download.

The Pipeline Safety Trust announces we have hired Bill Caram as our new Deputy Director. Bill will be starting with the PST in late March and will transition into the Executive Director position at some point in the second half of 2020. click here for more information.

Links to video of each of the speakers at our annual conference, Nov. 7th & 8th, are now available at the Video on demand page.

Read a transcript of the PST Testimony to House Transportation and Infrastructure Committee, Subcommittee on Railroads, Pipelines, and Hazardous Materials, Hearing on Pipeline Safety:Reviewing the Status of Mandates and Examining Additional Safety Needs, April 2, 2019.

To help people visualize how often pipelines fail we have created maps that allow you to examine failure information state by state, and the pop-up windows will provide reported information on each failure as you select it.

Funding Opportunity for local communities and non-profits: PHMSA has announced the opening of the application period for Community Technical Assistance grants. Applications are due May 3, 2019. Click here for more information.

Videos and PowerPoint presentations from our conference are now available for on demand viewing. You can find them here.

If you are looking for information and data that relates to the Columbia Gas of Massachusetts tragedy on 9/13/18 we have posted quite a bit of information here.

Results of our 2017 state pipeline safety website review are now posted! Check out our take on this year’s review at the Smart Pig Blog.

Our conference held on November 2-3 was a great success! Videos and speaker presentation documents are now available on our conference page.

UPDATE: New hazardous liquid rule delayed due to Trump administration executive order. Here is our press release with our thoughts on these new rules. See the rule that was going to be published here.

We are now posting video and presentation slides from our recent Pipeline Safety Trust conference held in New Orleans. You can find these at this link.

Many Comments Submitted on Hazardous Liquid Pipeline Safety Rulemaking.
Comments were due January 8 to the Pipeline and Hazardous Materials Safety Administration. See links on our page about Opportunities for Comment and Participation.

On July 14th the Trust Testified to Congress
You can review all testimony here, or view a video of the entire hearing here

Study Finds Twice As Much Methane Is Leaking In Northeast Cities As EPA Estimated
By Heather Goldstone and Elsa Partan, WGBH Boston, September 17, 2019

Court to rule if B.C. can limit bitumen in key case for Trans Mountain pipeline, The Canadian Press
Laura Kane, May 23, 2019

Land Grab: Property Owners Fight Back Against Pipeline IOUs, WTKR, By Web Staff And CNN Wire, Updated At 11:49am, April 10, 2019

Federal lawsuit over a gas pipeline near Belton is brought back to life By Kirk Brown, Anderson Independent Mail (April 12, 2018)

Stretch of pipeline to be replaced after Orion blast By Mike Martindale, The Detroit News, (January 15, 2018)

To see news that has rolled off of our home page click here.

Connect with us on social media

When we mention environmental justice related to pipelines regarding the placement of compressor stations, pump stations, tank farms, etc people often ask us what environmental justice even is? This great reporting by the NY Times explains. www.nytimes.com/2020/07/28/magazine/pollution-philadelphia-black-americans.html?referringSource=a... ... See MoreSee Less

Pollution Is Killing Black Americans. This Community Fought Back.

African-Americans are 75 percent more likely than others to live near facil...

"I think it's important to point out that there are environmental consequences to continuing to release gas that we need to take into account here and balance against the safety set of issues," said Gosman, who sits on the board of directors of the Pipeline Safety Trust, which represents the public on the GPAC. ... See MoreSee Less

Some aspects of proposed rules on shutoff valves and standards for isolatin...

"I can sum it up in one word, and that is: nightmare." 10 years after massive oil spill in Michigan

One of the worst oil spills into an inland waterway in U.S. history happene...

The decade that began in January 2010 and ended at the end of 2019 was punctuated with many astounding pipeline failures that captured the attention of the nation. In response to these horrific tragedies, and the other 6,300+ reportable pipeline failures that occurred during this period, both the pipeline industry and regulators set out to improve safety through a series of new voluntary and regulatory initiatives. We thought the end of the decade would be a good time to take a look at the PHMSA data to see what progress has been made toward the shared goal of Zero Incidents. This brief report shows what we found. ... See MoreSee Less

"pipeline projects like these are being challenged as never before as protests spread, economics shift, environmentalists mount increasingly sophisticated legal attacks and more states seek to reduce their use of fossil fuels to address climate change." ... See MoreSee Less

Is This the End of New Pipelines?